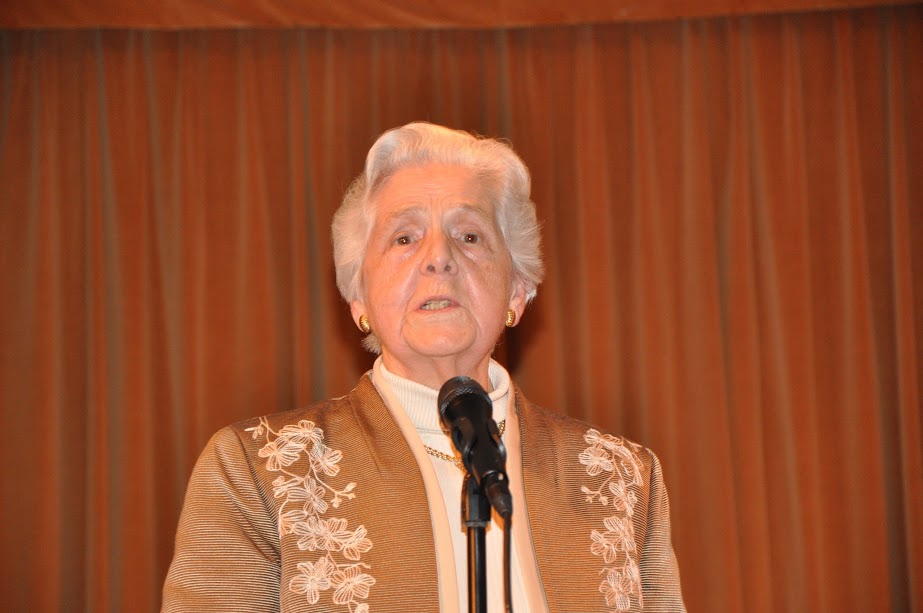 I thank all those who came to share our celebration with us. I especially thank you for your attention and interest in our studies and work for the good and benefit of our younger generation. This is our succession, our future, our hope.

In the coming year - 2017 - our Russian school will celebrate its 10th anniversary. The time has flown by. It seems not so long ago that we opened the school, and here we already exist for 10 years. But very precious years! And the precious work, carried out during this comparatively short period of time. A Russian proverb says: "A little goes a long way". Our joint work in school is this very proverb.

Our school was founded in 2007. This year wasn’t easy for all of us, a watershed year in many respects. And it was a turning point for all of us, each in his own way. Some dark paths radically changed the path of our Russian Orthodox Church Abroad. Our bishops joined the Moscow Patriarchate, which was always considered non-canonical. And this act changed its previous path of complete freedom from worldly authorities, more so from the Godless regime in Russia. For us, the Orthodox Russian people, scattered across the globe after the Revolution of 1917, it was a betrayal of freedom and purity of our precious Truth of Christ. I won’t go into the details of this change. I will only say that at the time of our school’s appearance, it turned out to be necessary and popular for many.

The first meeting was in early September of 2007, I remember it was in the library at the Tolstoy Foundation and there were families with school-age children interested in the new school. The Foundation’s director offered us use of the dining room in the Main House for studies. These spaces in no way met the needs, not only of our schools, but indeed any school. They then offered us the deserted OPH 1, previously a home for the aged. The energetic Yuri Lukin, having immediately examined the empty building, which fortunately for us, wasn’t locked, having returned, declared that he can, with help, to renovate this building in the remaining two weeks for the school’s activities. And work together began in full swing. We all worked together from young to old. We cleaned, painted, washed windows, floors. We brought in school furniture, received from some renovated school in New York. In short, the school was ready for studies. And indeed our school was solemnly opened on September 10th, after the prayer service in church.

That’s how the glorious history of the Russian School in the name of St. Sergius of Radonezh began. Our school has an orderly program of study, based on textbooks created for Russian children who receive their education in local schools in English. Therefore, we are engaged, mainly, in the preservation of the Russian language in the children, and teaching them God's Law, Russian history, literature and Orthodox culture.

Particular attention is given to extra-curricular activities aimed at expanding the children’s cultural horizons. By Christmas, our annual artistic theatrical performance is prepared. Among the parents there are talented artists, directors and hard-working kind assistants. For the last nine years, many excellent plays were staged with the participation of our not-less talented children. The very first school performance of the fairytaile “The Mansion”, under the guidance of Irina Tarrant was unforgettable. This performance immediately drew the attention of local Russians to our school. After that school Christmas show, they followed annually, not-less talented, school performances such as "The Magic Ring", "The Snow Queen", "Wash-'em-Clean", "Tsar Saltan", "Sadko", "The Little Humpbacked Horse", "The Scarlet Flower" and "Sleeping Beauty". The directors of these productions were, besides Irina Tarrant - Yura Lukin, Catherine Piskareva and Slava Nikitin, always surprised us with special, interesting stage effects.

Our school (ie, all the teachers, staff, and friends) meet during the school year just like during friendly meetings. In the autumn we meet over delicious dumplings (pelmeni), with which the kind dear ladies spoil us. Before Great Lent we meet over traditional pancakes (blini) with a viewing of our last Christmas production.

There is also a special program called "The Theme of the Day". A special school day is set aside for this with abbreviated lessons. The entire normal school schedule ends before lunch and the last hours are devoted to the topic of the day. I’ll name only a few of them. We had a program about P.A. Stolypin, his life and work for the good of Russia, there was the subject of coronations in general, and the coronations of Russian tsars and emperors of the Russian Empire. There was a program about Alexander Isayevich Solzhenitsyn. There was a program on the population of many nationalities of Russia. We had a program "1812: Invasion of Napoleon”. Rich literature in Russian exists on all these topics which is rarely available to our children.

If you wish to visit our school, you will see a lot of pictures about these programs on the walls of our rooms. As far as it is possible, everyone who wants to participate can in each class with their teachers.

Our academic year ends with thanksgiving prayer service in church, a solemn delivery of certificates for the academic year and honors for students of good and outstanding achievements.

There is yet another activity of our school, which is not observed in other parochial schools abroad. We give a special “revolving” medal "For Russian character." This medal isn’t easy to earn. It is issued only for a year to a student who has shown special zeal and love for the Russian Orthodox culture. Usually it is issued to a student graduating school. During the election of the candidate who receives this medal, we take into account the past years of study, overall behavior, and his/her comradely relations with other students of the school of his/her age and younger. Then the performances of the school choirs follow: the senior, middle and junior. A local ballet school also participates in performances. After all that, there is a fun picnic outdoors in the fresh air on marvelous lawns of the Tolstoy Foundation.

This is a brief overview of the work of our school in the name St. Sergius of Radonezh at the Tolstoy Foundation. This is how we end our academic year every year.

You are welcome, dear friends to our special programs and, especially, to the picnic at the end of the school year.

Now on to today's Christmas program. I bring your attention to the production of "Snow Maiden", under the guidance of its director Irina Tarrant. Thank you for attention!