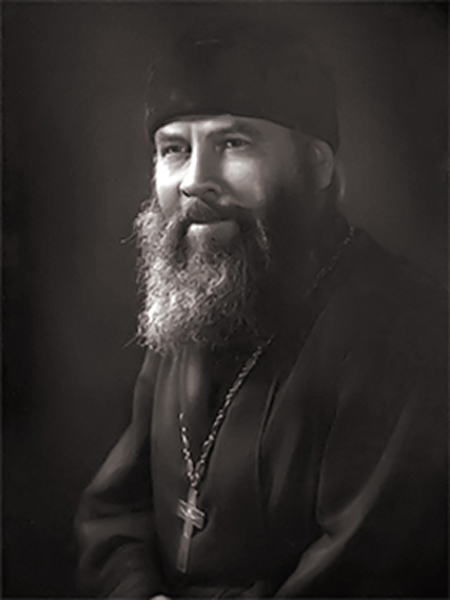 There is little that one can add to the detailed description of his life, not simple and full of fateful events, from his own words recorded by Olga Mikhailovna Tolstoy for the parish magazine. Father Seraphim was the son of a priest, Father Alexei Slobodskoy, who was shot on 28 August, 1937. We all know well how life was for children of clergy in the Soviet Union. The path to education was closed to them, not to mention the many other hardships in life. During World War II, Father Seraphim was drafted into the army and, without any training, was sent to the front lines. In German captivity, where thousands of Russian soldiers died of hunger, Father Seraphim met with two other artists Andrei Aleksandrovich Rostovtsev and Nikolai Alexandrovich Papkov. In the terrible conditions of German captivity, the artists became close friends, supporting one another and helping not to die of starvation. They painted portraits of his guards, and for that, they fed them. This saved them and helped them to survive.

The end of the war found them in Lithuania. The occupation forces accepted all the refugees in the camps, from which the people themselves established their lives in defeated Germany. So Father Seraphim with his friends ended up in Munich, in a Displaced Persons Camp in Pasing. There, Father Seraphim organized religious groups for the youth. Father Alexander Kiselev organized the RSCM (Russian Student Christian Movement) Congress in Munich. Father Seraphim and his youth group took part in this Congress. Father Seraphim (then still Seraphim Alexeyevich) met Elena Lopukhina (Yolochka) at this Congress. Father Seraphim began being at the House of the Good Samaritan, and Yolochka went to meetings of the religious group in Pasing. They married in 1949, and in 1951 he was ordained as a deacon and soon after that as a priest.

In 1951, already a priest, Father Seraphim arrived with his family in America. At first he was the rector of the Church of All Saints in Manhattan, and in 1953 was appointed as rector of Holy Virgin Protection Church in Nyack. All of his activities now went toward the construction of the his church. He fulfilled his vow, made in the horrible camp of Russian POWs in Germany. His fellow artist-friends, having lived through the camps with him, also participated in this. We can see this remarkable church, an embellishment of the town of Nyack, even to this day.

Father Seraphim and Matushka Yolochka completely gave themselves up to pastoral ministry, the life and needs of the parish. Matushka Yolochka read and sang in the choir gallery, thus in such a way was always close to Father Seraphim. Their home was always open for everyone who needed pastoral advice from the priest. With a hot and passionate heart, Father Seraphim deeply experienced all the difficulties, successes and conflicts (and there were many), in the construction of the church. The opinions and plans of the architect and the builders did not coincide. And Father Seraphim had to settle these conflicts. The parishioners also actively participated in the work of the parish. Each in their own way was satisfied by something, and not in others. Father Seraphim and his Matushka endured all this with patience, attention and love toward each parishioner. It's no wonder that the congregation sincerely loved their sympathetic pastor .

Father Seraphim always served with inspiration. But on Easter he simply beamed, addressing the worshipers with a triumphant cry "Christ is risen", to which the congregation responded just as triumphantly. His paschal joy infected everyone around him. On the first day of Easter, his house was open to everyone. He definitely waited for all the parishioners and friends at his house. Guests came and went all day, replacing new ones. My mother and I helped Matushka in the kitchen, washing dishes for the new guests, hardly succeeding to put clean dishes on the table. I remember how Alyosha Slobodskoy, one the evening of the first day of Easter told his parents that he wanted to go to sleep, since he "didn't have breakfast, nor lunch and didn't eat dinner!" During this time he ate something the entire day.

They began to study Russian within the family in the same year of 1953, desiring to preserve their language and their culture in their children, growing up in a heterodox environment and receiving and education in English. This beginning grew into a large, successful parish school. Father Seraphim and Matushka Yolochka both gave a lot of attention and time to this very important work. Father Seraphim taught and, during the night, wrote "The Laws of God". And Matushka Yolochka also taught in the parish school, and along the way, created a special Primer with workbooks for students. All of us who knew or worked together with Father Seraphim and Matushka Yolochka remember them with love, and we thank God for our years of life together with them.