The Tale of the Fisherman and The Fish

The Christmas holidays ended with a wonderful Christmas performance by our Russian school. So much effort and labor was invested within half a year by everyone who worked on the play.

A special thanks to Vyacheslav Nikitin and Ekaterina Andrievskaya for their leadership and staging of the play. There was great work with actors, preparation of sets and costumes and the organization of parents and assistants.

Production of scenery and props: 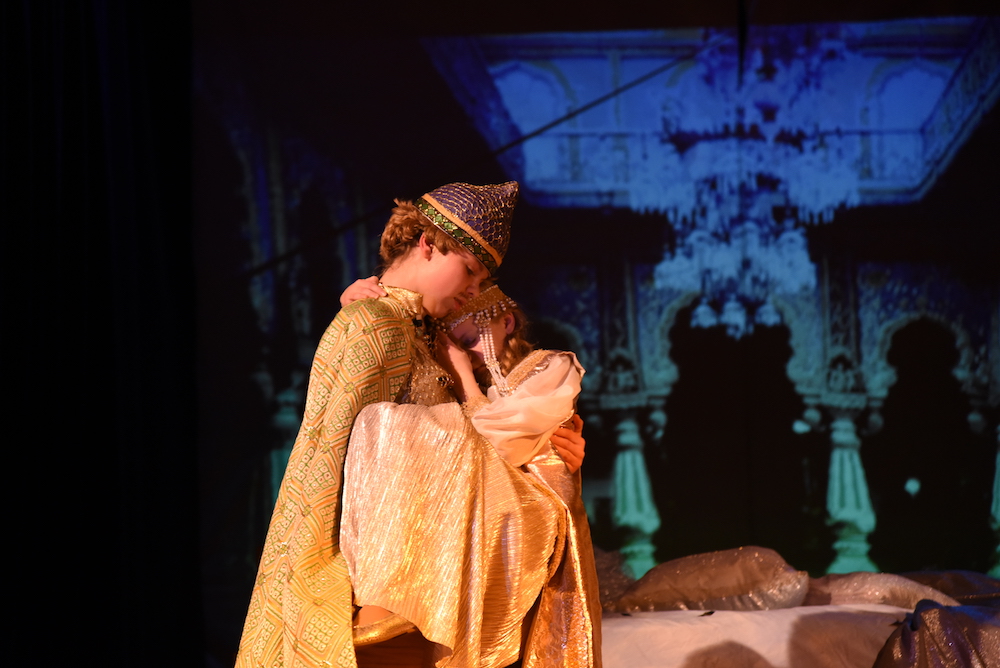 This year, Pushkin's poem “Ruslan and Ludmila” was performed under the capable guidance of our artist-engineer Slava Nikitin, who is well-versed in the modern technology which we have. The perfectly crafted script suited him well. Neither the "green oak", nor the "scientist's cat", the proud and wicked Faina, the wise Finn, the evil, spiteful, envious dwarf Chernomor were forgotten. Artistic backdrops appeared and the action took place in front of them. Young assistants exchanged props behind the stage. The special effects were unexpected and interesting. The battle of Ruslan with the "Head" was well-represented and his recognition, once the former hero of the giant. 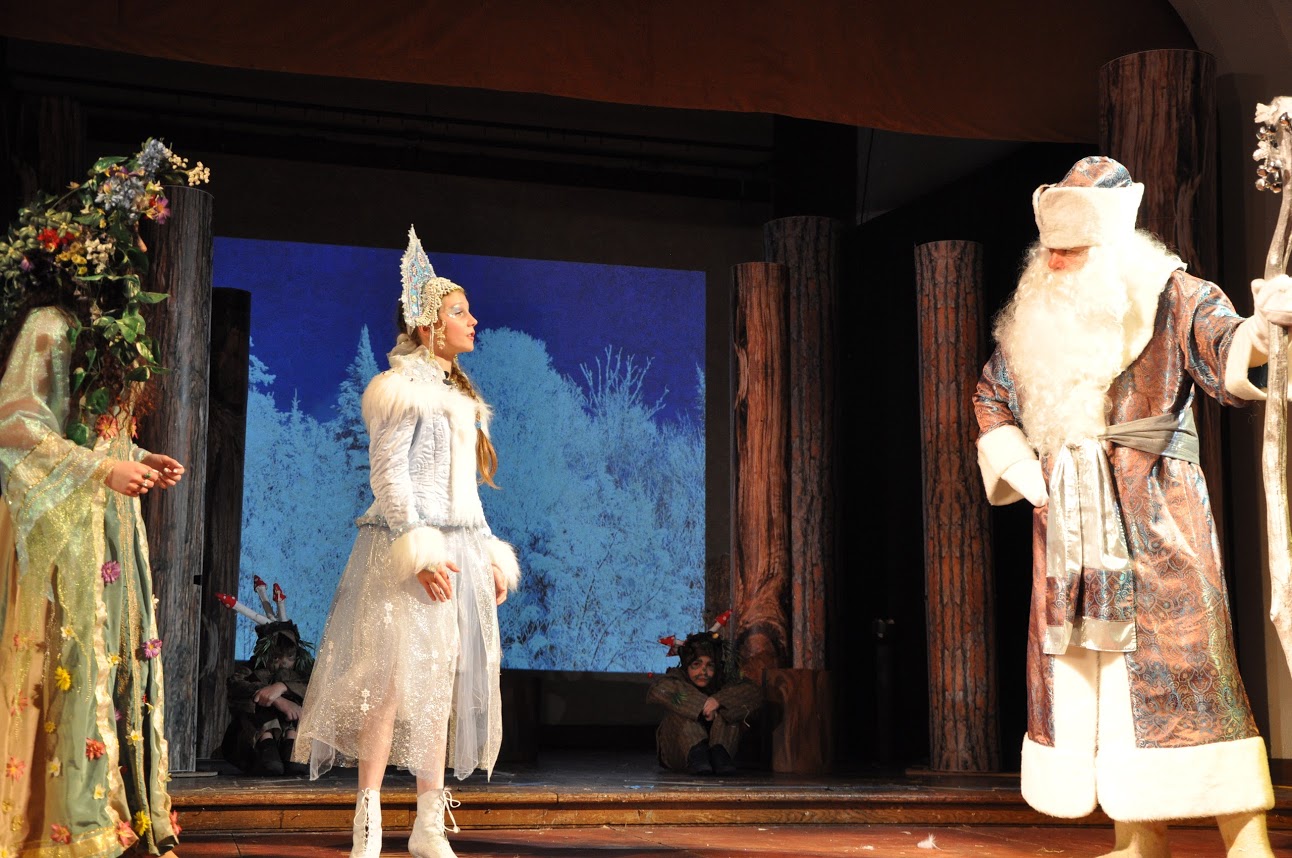 Deep in the forests of Northern Russia, in an isba (log hut), lived an old wood cutter and his wife. Times were hard, for winter had set in and deep snow covered the ground.

The wood cutter and his wife were both kind and hardworking but they were also sad and lonely, for they were childless and there was no-one to care for them or to help them through the cold winter.

The days passed slowly, with hard work their only comfort. There was wood to chop and food to find.

Then one day, whilst clearing an area so they could chop some more wood, they began to pile together heaps of snow. Remembering the games they used to play in their childhood, the old couple began to shape the snow into human form. By the time they had finished they were nearly frozen but the image of the young girl they had created was so beautiful, it was beyond description.

“See wife,” said the old man, “our daughter Snegurochka.” (Snow maiden.) The old woman smiled but as her husband turned away, there were tears in her eyes.

In the forest the twigs crackled and snapped, for watching the old couple was none other than Father Frost, an old winter god that lived deep in the forest glades.

Father Frost felt pity for the old couple and, at that moment, he decided to create for them a daughter in his own spirit. He scratched his long white beard and pondered for a while before raising the great staff he carried into the air. A frizzle of magic ripped through the forest.

The old couple turned to admire once more their handiwork and were astonished to see, standing in their garden, the most beautiful pale maiden with long flaxen hair.

She was dressed in a long, light blue robe, its collar and cuffs trimmed with soft fur; her robe was covered in shimmering snowflakes. On her head was a hat of fur and snowflakes that looked a little like a crown and which sparkled like an icy flame. Her shoulders were covered with a cape of dark blue and on her feet she wore embroidered boots.

The old couple blinked in wonder and dis

Scene 1 - The rich mansion of a guild in Novgorod

The wealthy Novgorod merchants congratulate themselves on their prosperity. Nezhata, a gusli player from Kiev, sings an heroic song. In reply, Sadko also sings, but the merchants laugh at him when he suggests that Novgorod would be more prosperous if a river joined Lake Ilmen to the ocean.

Scene 2 - The shores of Lake Ilmen

Sadko wanders unhappily by the lakeside. His singing attracts some swans, one of which changes into Volkhova, the Sea Princess, who wishes to marry a mortal. She explains to Sadko how to catch three golden fish which will lead to his fortune after a long voyage. Princess promises to him to wait patiently for his return. At dawn from the lake the voice of the Sea-King is heard. He calls his daughters home into the depths. Girls once again turn into white swans and swim away into the distance. 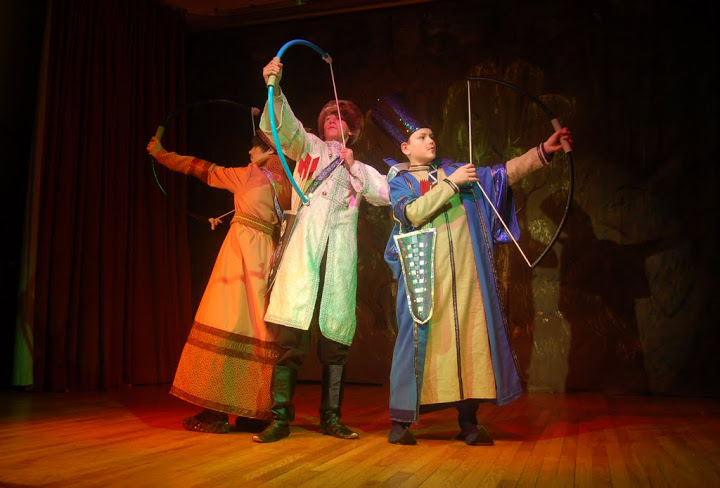 Many years ago a tsar had three sons. When they came of age he sent for them and said: "My sons, before I am too old I want you to marry, and I would like to see my grandchildren." The sons replied: "In that case, father, give us your blessing. But whom are we to marry?" "My sons," the tsar said, "take your bows, go out into the open field, and shoot an arrow. Wherever it falls, there you will find your wife."

The sons bowed to their father, took their bows, went into the fields, drew them and shot their arrows. The eldest son's arrow fell into a nobleman's courtyard, where it was picked up by his daughter. The second son's arrow fell into a merchant's courtyard, and it was picked up by his daughter. But the arrow shot by the youngest son, Prince Ivan, rose so high and flew so far that he didn't know where to look for it. So he started to walk, and at last he came to a marsh. In the marsh he saw a frog with his arrow in its mouth. He said to the frog: "Frog, give me back my arrow." But the frog replied: "Then take me for your wife." "Oh, come now," the prince said, "how can I have a frog as my wife?" "But you must, for it is the tsar's will." At first the prince tried to avoid it, but eventually he had to accept his fate and carry the frog home. 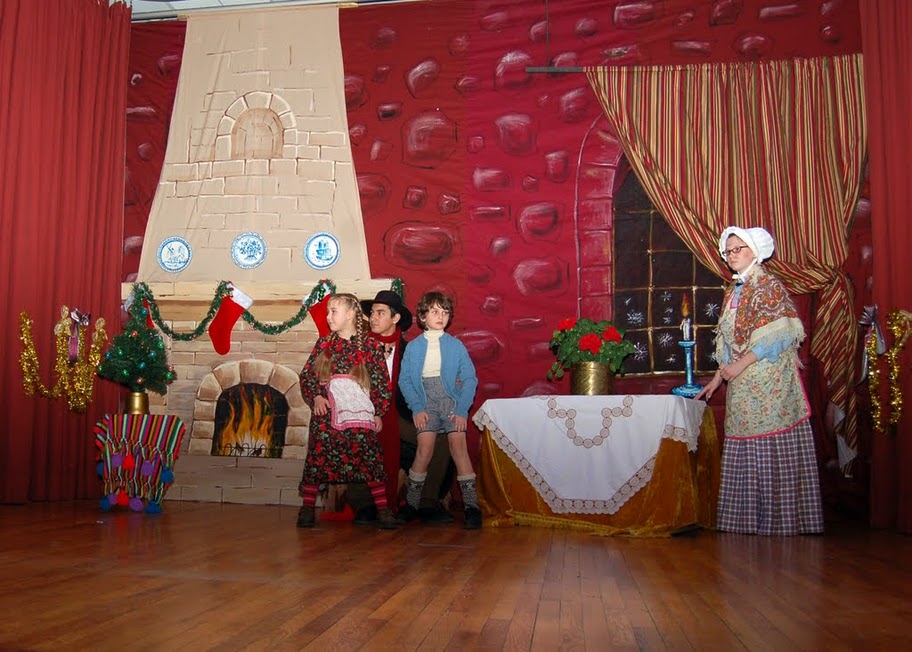 It's a pleasure to remember The Snow Queen 2010 performance. 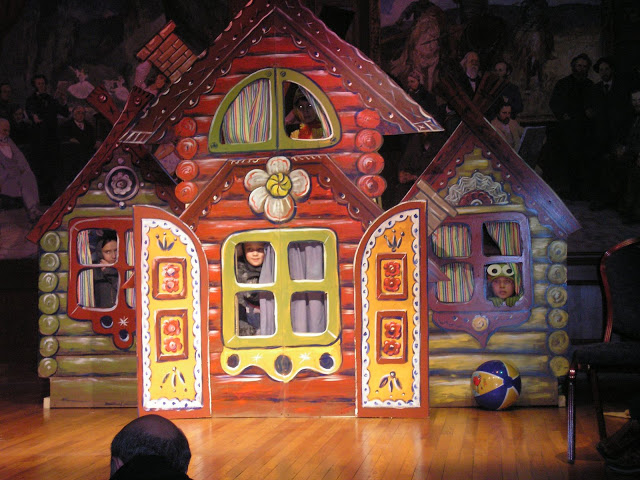 There stood a small wooden house (teremok) in the open field. A mouse ran by: - Little house, little house! Who lives in the little house? Nobody answered. The mouse went into the house and began to live there.

A frog hopped by: - Little house, little house! Who lives in the little house? -I am a mouse. And who are you? - I am a frog. Let's live together. So the mouse and the frog began living together. 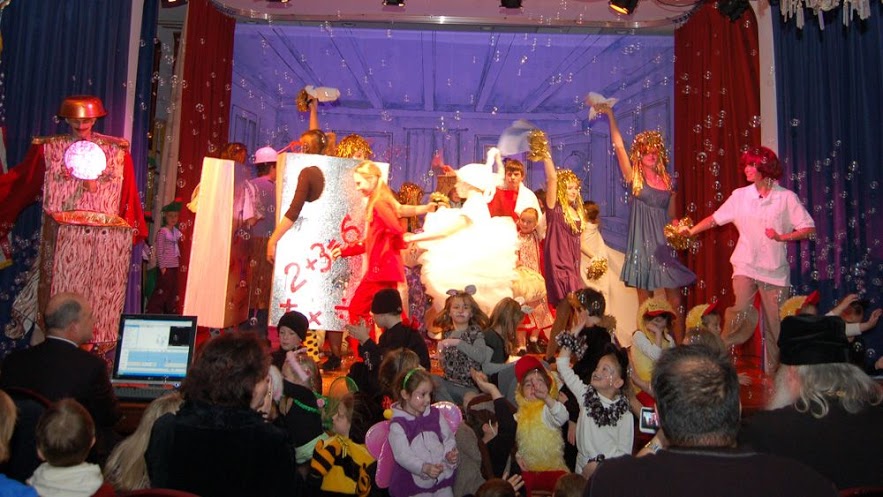 We can remember our show The Washbasin 2009 thanks to photos provided by Natalia Azrikan:

Oh, the blanket Has run off, And the bed sheet flew away, And the pillow, Like a frog, Leaped away from me.

As I try to grab the candle,

It just jumps into the boiler! As I try to get the book, It just jolts under the cradle!

I would like to drink some tea, I approach the samovar, But that little potbelly Ran from me as from a fire.

Oh, my goodness, Jesus Christ, What is going on? Why is everything around me Spinning, Whirling, Speeding like a wheel? 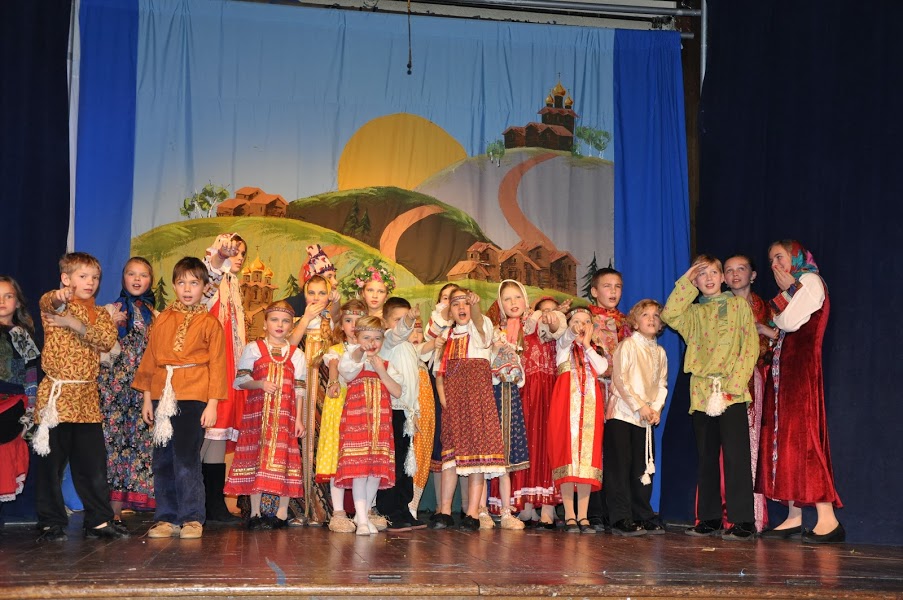 Once there was a farmer and had her son Simon. They lived in poverty: duds and patching, and there is nothing happened. He received Simon in the city pension for his father - a penny a month. Once Simon is this penny and saw a man about to strangle a puppy - a small, little white. Pity on the dog and the guy bought it. Mother scolds, say, a cow in the house there, and he buys dogs! 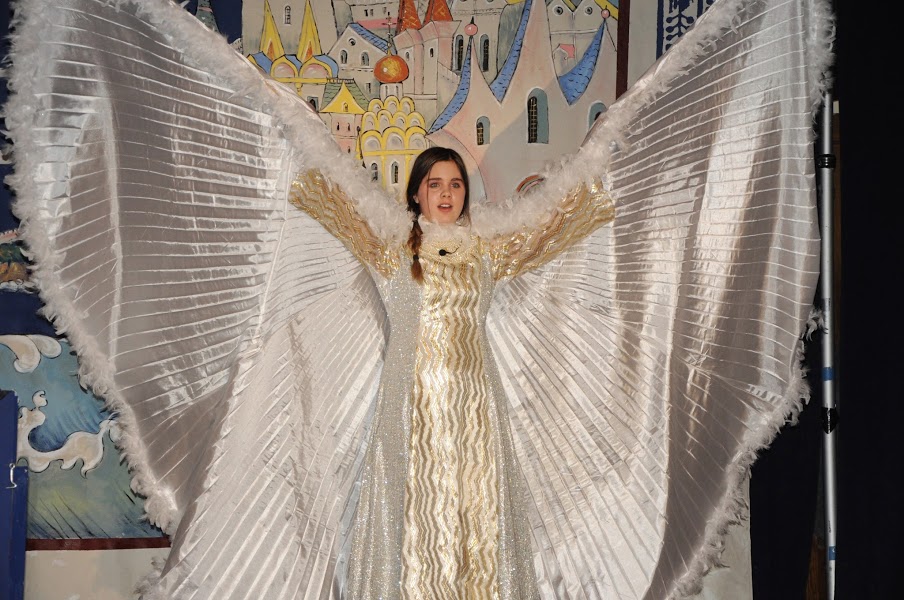 Winter evening in the village and three sisters are sitting at the yarn. Senior and middle boast its beauty, and the youngest was silent. For gentleness and modesty sisters consider it silly and forced to work for themselves. They are dreaming than each would become famous if the king married her. The eldest boasts an unprecedented feast average - alone weave cloth for the whole world, and the youngest said that would give birth to Tsar, a brave son. All this is heard lurking under the window Tsar Saltan. He enters the room and announces his decision to live in the palace of the three, the eldest cook, the second - a weaver, and the youngest - Tsareva wife. The king left with his younger sister, and the other two together with a woman Babarikha took counsel how upset luck lucky fool. They plot to deceive Saltan. 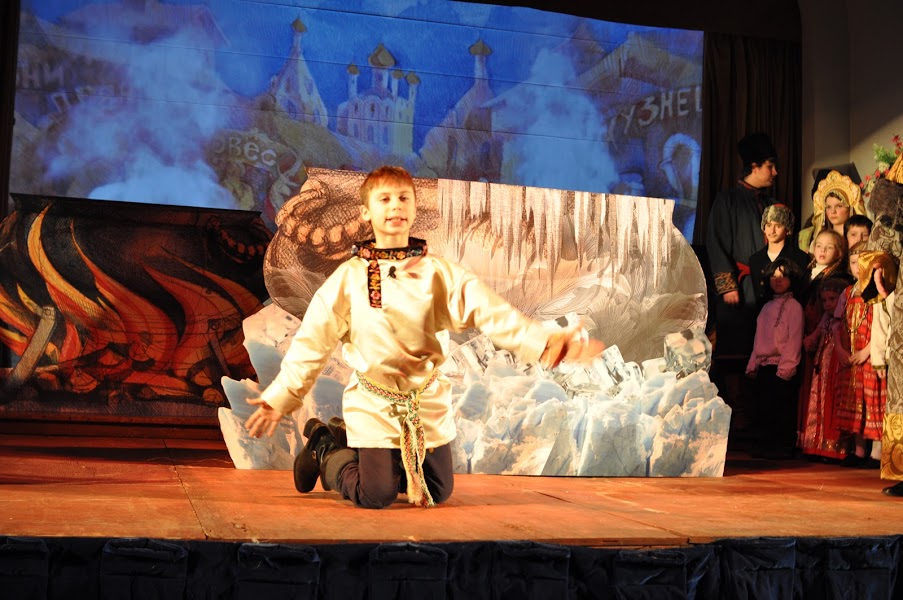