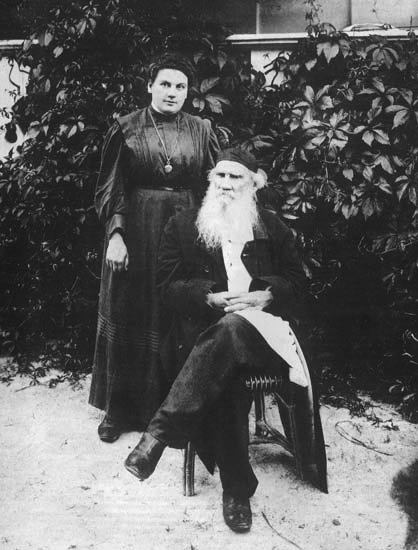 Born in Russia at Yasnaya Polyana in 1884, Alexandra Tolstoy, the youngest daughter of Leo Tolstoy, was permitted to leave Soviet Russia in 1929 after five arrests and a prison sentence for supporting the right of free speech and assembly. She settled in the United States in 1931 where she engaged in farming and lectured widely in schools, universities, and clubs. She made friends quickly and learned to love and admire the United States.

In l941, Eleanor Roosevelt wrote the following words describing her first meeting with Alexandra Tolstoy: "Countess Tolstoy came to see me at my apartment in New York City. She is no longer very young, but she climbed the three flights of stairs with less puffing than most of us. Her interest in her mission was so great that I think she scarcely gave a thought to her exertions...Countess Tolstoy, by her enthusiasm and devotion, inspires you greatly with a desire to be helpful to this group of harassed human beings."

Alexandra Tolstoy was a consistent beacon of light to the aged, to the young, to the sick, to the distressed and the forgotten at home and abroad. People were saying about her that "no one came to her despondent without solace. No one came in despair without receiving encouragement."

Energetic all her life, with a remarkable calmness of spirit, Alexandra Tolstoy lived at the TF Center in Valley Cottage, New York. She was active as the Foundation's President and served as a fundraiser, a lecturer, and a writer until l976. She died in 1979 at age 96.