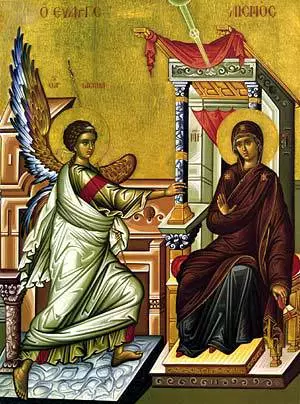 39 And Mary arose in those days, and went into the hill country with haste, into a city of Juda;

40 And entered into the house of Zacharias, and saluted Elisabeth.

41 And it came to pass, that, when Elisabeth heard the salutation of Mary, the babe leaped in her womb; and Elisabeth was filled with the Holy Spirit:

42 And she spake out with a loud voice, and said, Blessed art thou among women, and blessed is the fruit of thy womb.

43 And whence is this to me, that the mother of my Lord should come to me?

44 For, lo, as soon as the voice of thy salutation sounded in mine ears, the Babe leaped in my womb for joy.

45 And blessed is she that believed: for there shall be a performance of those things which were told her from the Lord.

46 And Mary said, My soul doth magnify the Lord,

47 And my spirit hath rejoiced in God my Saviour.

48 For He hath regarded the low estate of his handmaiden: for, behold, from henceforth all generations shall call me blessed.

49 For He that is mighty hath done to me great things; and holy is His name.

56 And Mary abode with her about three months, and returned to her own house. **

The Epistle of Saint Paul to the:

11 For both He that sanctifieth and they who are sanctified are all of one: for which cause He is not ashamed to call them brethren,

12 Saying, I will declare thy name unto my brethren, in the midst of the church will I sing praise unto thee.

13 And again, I will put my trust in Him. And again, Behold I and the children which God hath given me.

14 For as much then as the children are partakers of flesh and blood, He also Himself likewise took part of the same; that through death He might destroy him that had the power of death, that is, the devil;

15 And deliver them who through fear of death were all their lifetime subject to bondage.

16 For verily He took not on him the nature of angels; but He took on Him the seed of Abraham.

17 Wherefore in all things it behooved Him to be made like unto his brethren, that He might be a merciful and faithful high priest in things pertaining to God, to make reconciliation for the sins of the people.

18 For in that He Himself hath suffered being tempted, He is able to succour them that are tempted.

The Holy Gospel according to:

24 And after those days his wife Elisabeth conceived, and hid herself five months, saying,

25 Thus hath the Lord dealt with me in the days wherein he looked on me, to take away my reproach among men.

26 And in the sixth month the angel Gabriel was sent from God unto a city of Galilee, named Nazareth,

27 To a virgin espoused to a man whose name was Joseph, of the house of David; and the virgin's name was Mary.

28 And the angel came in unto her, and said, Hail, thou that art highly favoured, the Lord is with thee: blessed art thou among women.

29 And when she saw him, she was troubled at his saying, and cast in her mind what manner of salutation this should be.

30 And the angel said unto her, Fear not, Mary: for thou hast found favour with God.

31 And, behold, thou shalt conceive in thy womb, and bring forth a son, and shalt call His name Jesus.

32 He shall be great, and shall be called the Son of the Highest: and the Lord God shall give unto Him the throne of His father David:

33 And He shall reign over the house of Jacob for ever; and of His kingdom there shall be no end.

34 Then said Mary unto the angel, How shall this be, seeing I know not a man?

35 And the angel answered and said unto her, The Holy Spirit host shall come upon thee, and the power of the Highest shall overshadow thee: therefore also that holy thing which shall be born of thee shall be called the Son of God.

36 And, behold, thy cousin Elisabeth, she hath also conceived a son in her old age: and this is the sixth month with her, who was called barren.

37 For with God nothing shall be impossible.

38 And Mary said, Behold the handmaid of the Lord; be it unto me according to thy word. And the angel departed from her.