The Raising of Saint Lazarus and The Triumphal Entry into Jerusalem 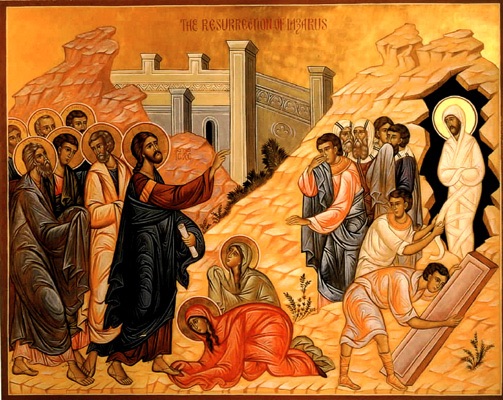 The Raising of Saint Lazarus.

The Jewish feast of the Passover drew near; and with it, the last days of the life of Jesus Christ on earth occurred. The malice of the Pharisees and Jewish leaders reached its peak. Their hearts hardened from envy, love of power, and other vices, and they did not want to accept the simple and compassionate teachings of Christ. They awaited a convenient occasion to seize the Saviour and put Him to death; and now, the time for them had arrived. The power of darkness set in, and the Lord was being betrayed into the hands of men.

At this time in the village of Bethany, Lazarus, the brother of Martha and Mary, was ill. The Lord loved Lazarusand his sisters and often visited this blessed family.

When Lazarus fell ill, Jesus Christ was not in Judea. The sisters sent to Him, saying, "Lord! The one whom You love is ill."

But when Jesus Christ heard it He said, "This illness is not unto death; it is for the glory of God, so that the Son of God may be glorified by means of it."

The Saviour stayed two days longer in the place where He was. Then, He said to the disciples, "Let us go into Judea again. Our friend Lazarus has fallen asleep, but I go to awaken him." Jesus Christ spoke to them about the death of Lazarus, and the disciples thought that He was talking about usual sleep; and since sleep at a time of illness was a good sign of recovery, they said, "Lord, if he has fallen asleep, he should recover."

Then, Jesus Christ told them plainly, "Lazarus is dead; and for your sake, I am glad I have not been there, so that you may believe. But let us go to him."

When Jesus came to Bethany, Lazarus had already been in the tomb for four days. Many of the Jews from Jerusalem had come to Martha and Mary to console them.

Martha first heard that Jesus was coming and hurried to meet Him. Mary, in deep grief, sat in the house. When Martha met the Saviour, she said, "Lord, if You had been here, my brother would not have died. And even now, I know that whatever You ask from God, God will give You."

Jesus Christ said to her, "Your brother will rise again."

Then, Jesus said to her, "I am the resurrection and the life; he who believes in Me, though he die, yet shall he live. And whoever lives and believes in Me shall never die. Do you believe this?"

Martha said to Him, "Yes, Lord; I believe that You are the Christ, the Son of God, Who is to come into the world." When she had said this, she quickly went home and quietly said to her sister Mary, "The Teacher is here and is calling for you."

Mary, as soon as she heard this joyful news, rose quickly and went to Jesus Christ. When the Jews who were with her in the house consoling her saw Mary rise quickly and go out, they followed her supposing that she was going to the tomb to weep there. The Saviour had not yet come to the village but was still in the place where Martha had met Him.

Mary, when she came where Jesus was, fell at His feet saying to Him, "Lord, if You had been here, my brother would not have died."

When Jesus Christ saw her weeping and the Jews who came with her also weeping, He was deeply troubled in spirit and said, "Where have you laid him?"

They said to Him, "Lord, come and see." Jesus Christ wept.

When they came to the tomb of Lazarus, it was a cave, and the entrance was blocked up with a stone. Christ said, "Take away the stone."

Martha said to Him, "Lord! By this time there will be an odour, for he has been dead for four days."

Jesus said to her, "Did I not tell you that if you would believe, you would see the glory of God?" So they took away the stone.

Then, Jesus lifted His eyes to Heaven and said to God His Father, "Father, I thank Thee that Thou hast heard Me. I know that Thou hearest Me always, but I have said this on account of the people standing by Me that they may believe that Thou hast send Me."

When He had said this, He cried with a loud voice, "Lazarus, come forth." The dead man came out, His hands and feet bound with bandages, and his face wrapped with a cloth, as the Jews dressed the dead.

Jesus said to them, "Unbind him and let him go." Then, many of the Jews, who had been there and seen this miracle, believed in Jesus Christ. But some of them went to the Pharisees and told them what Jesus had done. The enemies of Christ, the chief priests and the Pharisees were troubled and fearing that all the people would believe in Jesus Christ, gathered a council and decided to kill Jesus Christ. Word of this great miracle began to spread all over Jerusalem. Many Jews went to the home of Lazarus to see him and having seen believed in Jesus Christ. Then, the chief priests and scribes plotted to kill Lazarus. But Lazarus, after his resurrection by the Saviour, lived a long time and was later a bishop on the island of Cyprus.

This great miracle of the Saviour, the raising of Lazarus, is commemorated by the Holy Orthodox Church on theSaturday of the sixth week of the Great Fast (the eve of Palm Sunday).

The Triumphal Entry into Jerusalem.

Soon after the raising of Lazarus, six days before the Jewish Passover, Jesus Christ made a triumphal entry into Jerusalem to show that He was the true Christ the King and was going to death voluntarily.

When they drew near to Jerusalem, coming to the village of Bethpage, at the Mount of Olives, Jesus Christ sent two of His disciples saying to them, "Go into the village opposite you; and immediately, you will find a donkey tied and a colt with her on which no one has ever sat. Untie it and bring it to me. If any one says anything to you, you shall say, ‘The Lord needs it’."

The disciples went away and found it as He had told them. They brought the donkey and the colt and put their garments on the colt, and Jesus sat on it.

In the meantime in Jerusalem, they learned that Jesus, the One Who raised Lazarus from the dead after four days, was coming to Jerusalem. Crowds of people, gathered from everywhere for the feast of the Passover, went to meet Him. Many took off their outer garments and spread them on the road before Him. Others cut palm branches, carried them in their hands and spread them on the road. And all the people, who went before and who followed, cried out with joy, "Hosanna (Salvation) to the Son of David! Blessed is He Who comes in the name of the Lord;" — that is, worthy of praise is the One Who comes in the name of the Lord, sent from God. "King of Israel! Hosanna in the highest!"

When He drew near to Jerusalem, the Saviour looked upon it with sorrow. He knew that the people would reject Him, their Saviour, and that Jerusalem would be destroyed. Jesus Christ wept over it and said, "If you have known, even you, at least in this day, the things which belong unto your peace! but now they are hid from your eyes;" — that is, you stubbornly close your eyes to all of God’s favour bestowed on you. "For the days shall come upon you when your enemies will cast up a bank about you, and surround you, and hem you in on every side, and dash you to the ground, you and your children with you, and they will not leave one stone upon another because you did not know (did not want to acknowledge) the time of your visitation (the time when the Lord visited you)."

When Jesus Christ entered Jerusalem, the entire city was stirred, saying, "Who is this?"

The crowds answered, "This is the prophet Jesus from Nazareth of Galilee," and told them about how He had called Lazarus forth from the tomb and raised him from the dead.

Jesus entered the Temple and again, as in the first year of His teaching, drove out all who sold and bought in the Temple, saying to them "It is written, ‘My house shall be called a house of prayer,’ but you have made it a den of robbers."

The blind and the lame came to Him in the Temple, and He healed them. The people, seeing the wonderful things Jesus Christ did, began to praise Him even more. Even little children being in the Temple cried out, "Hosanna to the Son of David."

The chief priests and the scribes were indignant and they said to Him, "Do you hear what they are saying?"

Jesus Christ said to them, "Yes, have you never read: ‘Out of the mouths of babes and sucklings hast Thou perfected praise’?" (Ps. 8:3). Jesus Christ taught daily in the Temple; and when evening came, He went out of the city. The chief priests and the scribes and the principal men of the people sought an opportunity to destroy Him, but they could not, for all the people were very anxious to hear Him.

The triumphant Entry of the Lord into Jerusalem is celebrated by the Holy Orthodox Church on the last Sunday before the bright feast of Pascha. This is one of the great feasts, and it is also called Palm Sunday because on this feast during the All-night Vigil service, or at Matins, blessed branches of palms, pussy willows, or other early spring growth are distributed to the faithful. In ancient times, the king was met with green branches when he was returning in triumph after victory over his enemies. And we holding in our hands the branches of the first blossoms of spring glorify the Saviour as the Victor over death because He raised the dead and on this very day entered Jerusalem to die for our sins and to rise again thereby saving us from eternal death and eternal torment. The branches serve for us then as a symbol of the victory of Christ over death and should remind us of the future resurrection of all of us from death.