6th Sunday of Great Lent. The Entry of the Lord into Jerusalem 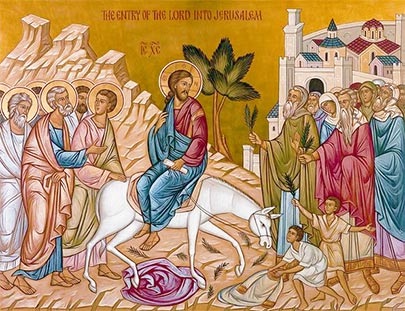 21 And when they drew nigh unto Jerusalem, and were come to Bethphage, unto the mount of Olives, then sent Jesus two disciples,

2 Saying unto them, Go into the village over against you, and straightway ye shall find an ass tied, and a colt with her: loose them, and bring them unto Me.

3 And if any man say ought unto you, ye shall say, The Lord hath need of them; and straightway he will send them.

4 All this was done, that it might be fulfilled which was spoken by the prophet, saying,

5 Tell ye the daughter of Sion, Behold, thy King cometh unto thee, meek, and sitting upon an ass, and a colt the foal of an ass.

6 And the disciples went, and did as Jesus commanded them,

7 And brought the ass, and the colt, and put on them their clothes, and they set Him thereon.

8 And a very great multitude spread their garments in the way; others cut down branches from the trees, and strawed them in the way.

9 And the multitudes that went before, and that followed, cried, saying, Hosanna to the son of David: Blessed is he that cometh in the name of the Lord; Hosanna in the highest.

10 And when He was come into Jerusalem, all the city was moved, saying, Who is this?

11 And the multitude said, This is Jesus the prophet of Nazareth of Galilee.

15 And when the chief priests and scribes saw the wonderful things that He did, and the children crying in the temple, and saying, Hosanna to the son of David; they were sore displeased,

16 And said unto Him, Hearest thou what these say? And Jesus saith unto them, Yea; have ye never read, Out of the mouth of babes and sucklings thou hast perfected praise?

17 And He left them, and went out of the city into Bethany; and He lodged there.

The Epistle of Saint Paul to the Philippians 4:4-9

4 Rejoice in the Lord always: and again I say, Rejoice.

5 Let your moderation be known unto all men. The Lord is at hand.

6 Be careful for nothing; but in every thing by prayer and supplication with thanksgiving let your requests be made known unto God.

7 And the peace of God, which passeth all understanding, shall keep your hearts and minds through Christ Jesus.

9 Those things, which ye have both learned, and received, and heard, and seen in me, do: and the God of peace shall be with you.

The Holy Gospel according to:

12 Then Jesus six days before the passover came to Bethany, where Lazarus was, which had been dead, whom He raised from the dead.

2 There they made Him a supper; and Martha served: but Lazarus was one of them that sat at the table with Him.

3 Then took Mary a pound of ointment of spikenard, very costly, and anointed the feet of Jesus, and wiped His feet with her hair: and the house was filled with the odour of the ointment.

4 Then saith one of His disciples, Judas Iscariot, Simon's son, which should betray Him,

5 Why was not this ointment sold for three hundred pence, and given to the poor?

6 This he said, not that he cared for the poor; but because he was a thief, and had the bag, and bare what was put therein.

7 Then said Jesus, Let her alone: against the day of My burying hath she kept this.

8 For the poor always ye have with you; but Me ye have not always.

9 Much people of the Jews therefore knew that He was there: and they came not for Jesus' sake only, but that they might see Lazarus also, whom He had raised from the dead.

10 But the chief priests consulted that they might put Lazarus also to death;

11 Because that by reason of Him many of the Jews went away, and believed on Jesus.

12 On the next day much people that were come to the feast, when they heard that Jesus was coming to Jerusalem,

13 Took branches of palm trees, and went forth to meet Him, and cried, Hosanna: Blessed is the King of Israel that cometh in the name of the Lord.

14 And Jesus, when He had found a young ass, sat thereon; as it is written,

15 Fear not, daughter of Sion: behold, thy King cometh, sitting on an ass's colt.

16 These things understood not His disciples at the first: but when Jesus was glorified, then remembered they that these things were written of Him, and that they had done these things unto Him.

17 The people therefore that was with him when he called Lazarus out of his grave, and raised him from the dead, bare record.

18 For this cause the people also met Him, for that they heard that He had done this miracle.